July rolled in hot and rolled out hot

It has been one hot month

We usually don't have to turn air conditioning on till the end of August but we finally gave in and turned it on when the night temps didnt get below 70. Then last night and today we had some rain, if felt more like Texas than it did Washington. Needless to say I didn't do much quilting but I did get more fabric in the store.

The beginning of the month I did finish a flannel quilt with minky backing for my brother who is going through chemo and radiation. What do you think a bit much for July in Nevada but I loved the flannel fabric, maybe should have done something different than minky back but I wanted it to be soft. Winters coming right:) 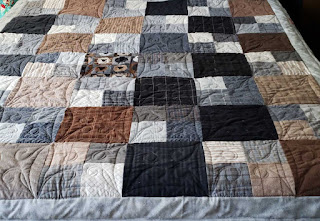 Also at the beginning of the month, I did start another quilt that I have had on my cutting table off and on for months. I would get it out and ready to cut and would move if off because something else was more pressing. Put it back on the table, put it away. I think I did that a half a dozen times before I finally cut it up. The blocks got done but it was once again moved off the table and needs to be moved back on. Barb from Bejeweled quilts bought the same FQ bundle, Bella Mariposa from Robert Kaufman, and made a really cute jar quilt. Robert Kaufmans metallic fabrics are so irresistible and I usually cant resist. I just bought a layer cake Wildwood Grace, sooooo pretty. 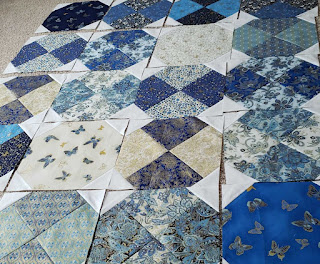 Lets hope August is not so hot but Neil Diamond didn't sing Hot August night for nothing. Stay safe and quilt on.