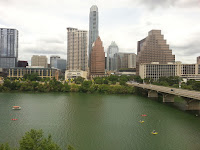 I have had a busy May. I think this weekend is the only one I have been home. I went to Austin Texas for work and while there I stopped in and visited my mother and two of my sisters. It had been awhile since I had been down there and it was nice to get to spend time with them. Barbara of Bejeweled Quilts is one of my sisters and we worked on our Island Batik June project together. We had a blast.

Also my other sister was so kind to embroider some towels for my grand-kids who got baptized. I was able to stop in SLC on my way home and enjoyed time watching two of my granddaughters compete in a national clogging competition at Lagoon. They both did really well, and the 13 year old got rookie of the year and made the all American team. Also, this same weekend my sons twins were baptized and I was able to spend time with him and his family. I just dont seem to get to spend as much time with family as I would like. Maybe when I retire. 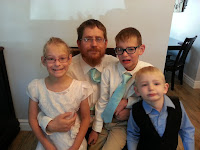 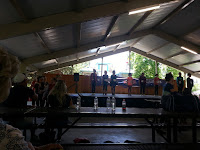 For my May Island Batik project I decided to do a star with red cream and white in honor of Memorial day.  For my father and the many family members that have served this country and still serve this country. 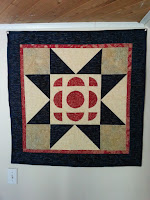 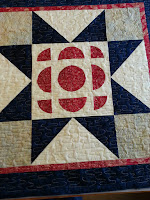 I saw a tutorial from Missouri Star Quilt Co that gave me the inspiration to design this star. I used up various scraps of my Island Batiks because I didn't have enough of the different lines to make the design that I wanted. I have lots of colors just not much cream or red.

Have a safe a memorable weekend.
Jeanette